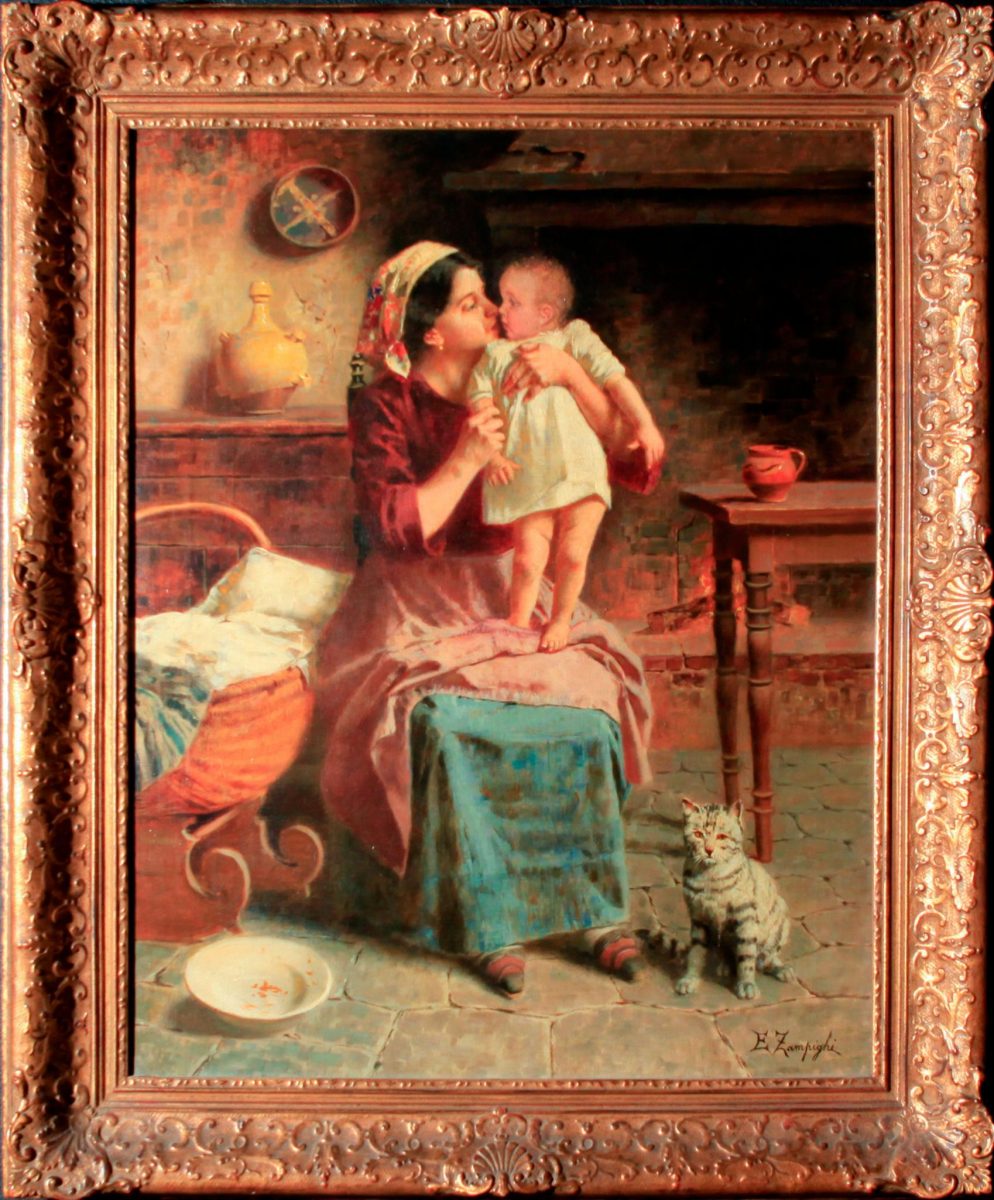 The Italian artist Eugenio Zampighi (1859–1944) is best known for his exquisite work in genre painting, or petit genre, capturing aspects of 19th and 20th century life and portraying ordinary people in their daily activities. But Zampighi’s work and training extended beyond capturing examples of the everyday: He won the Poletti Prize for painting in 1880 with his entry, A Retiarius Gladiator Wounded In A Flavian Amphitheater. After winning the Poletti Prize, Zampighi studied first in Rome and then in Florence, settling permanently in that city in 1884. Beginning in the 1880s, he produced a repertoire of genre scenes, with which he enjoyed extraordinary success and received offers of international commissions. Zampighi also worked in photography in his studio with models in peasant costume or wearing the dress of common people. Zampighi used the photographs to create idyllic scenes of Italian rural life, which proved highly popular with art collectors. Like other genre painters of the era, Zampighi’s scenes depict figures to whom no identity can be attached either individually or collectively—something that distinguishes petit genre from history (or grand genre) paintings and portraits. Depending on Zampighi’s preferences for the specific piece, these depictions were often realistic, imagined, or romanticized. Zampighi’s works remain highly sought after. Among his works recently won at auction: Washing The Baby (oil on canvas): sold for $6,000 in May 2019, in Detroit, Michigan; Eine Glückliche Familie (signed oil on canvas): sold for $22,358 in Apr 2019, in Vienna, Austria; Interno Di Cucina (signed oil on canvas): sold for $20,157 in Apr 2019, in Milan, Italy; The Happy Family (signed oil on canvas): sold for $16,000 in Feb 2019, in New York, NY. Whitley’s Auctioneers is proud to present for auction an original oil painting on canvas signed by artist Eugenio Zampighi. The current work features a genre scene with a peasant woman, her baby, and cat. Signed to lower right E. ZAMPIGHI and presented in a decorative wooden frame. Click here to preview this and see more details in the painting.