The Golden Age of Radio began with the dawn of commercial radio broadcasting in the early 1920s. Radio was the first broadcast medium, attracting people from all walks of life to listen regularly to their favorite programs on home radio consoles.

Radio brought vibrancy into everyday life: news, sports, entertainment, comedy, drama, and every kind of music imaginable. Radio was the great equalizer across all social divides: A 1947 survey found that fully 82 percent of Americans were regular radio listeners. 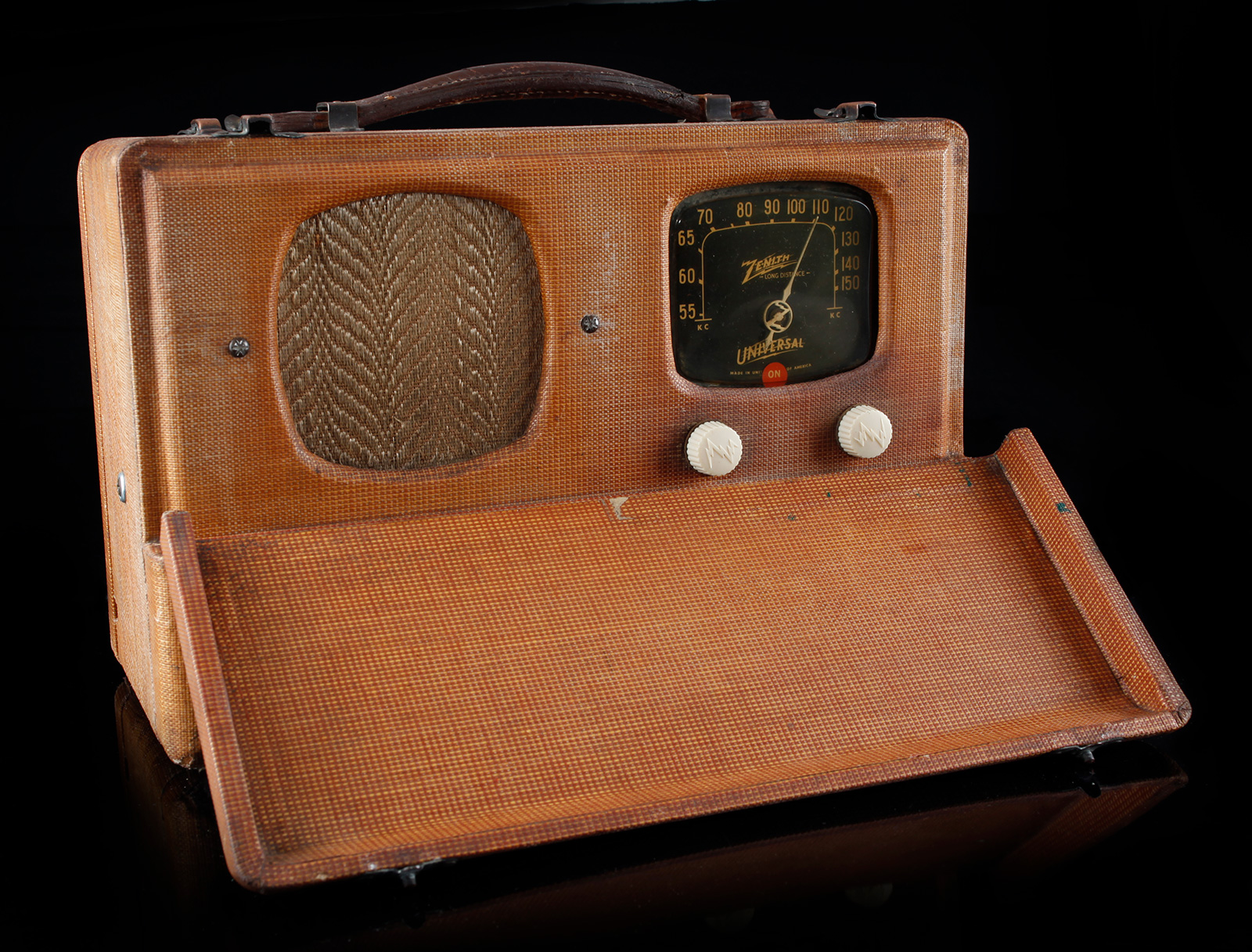 The early years of commercial radio were a Wild and Wooly epoch, with broadcasting electronics being developed at the same time fledgling stations were popping up to introduce the new technology to a world that was hungry for programming and innovations.

The demand for quality and for access to the newest radio technology led to the formation in 1918 of the Chicago Radio Laboratory (CRL) by two former Naval Intelligence specialists, Karl Hassel and Ralph Mathews, whose first manufacturing facility was Mathews’ kitchen table. 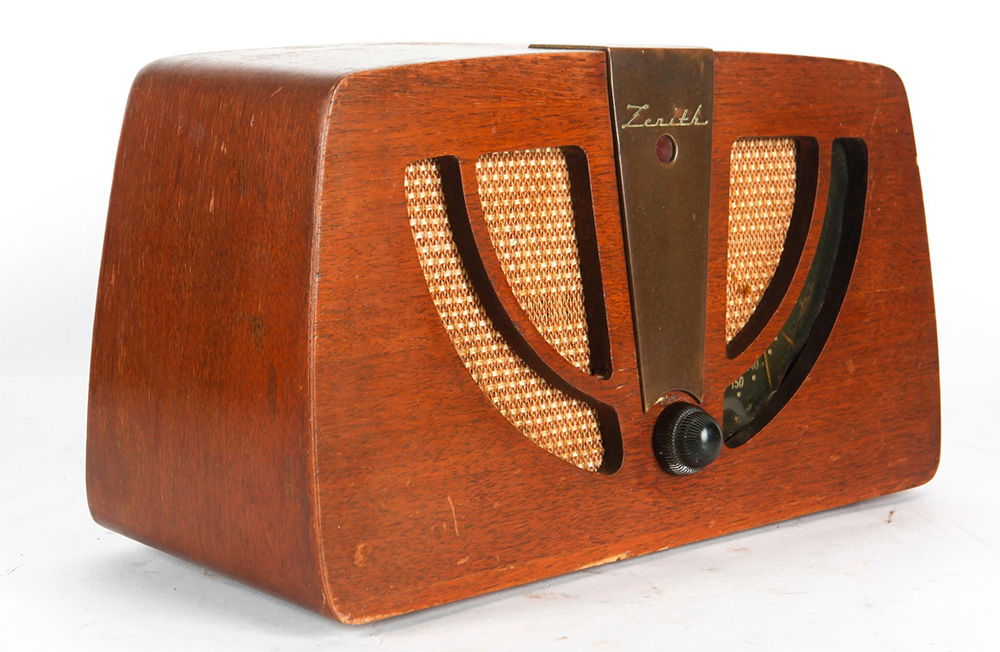 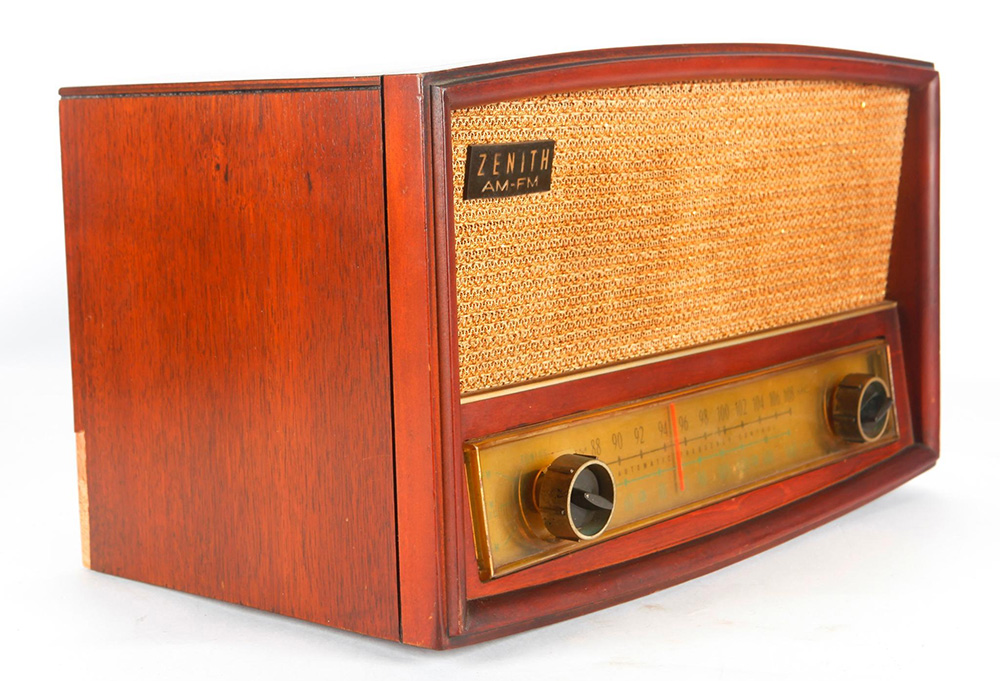 Originally formed to produce amateur radio equipment, CRL quickly became known for its technological innovations and the superior quality of its products. Incorporating in 1923 as Zenith Radio Corporation, the firm fast became known for its firsts: it introduced the first portable radio in 1924, then the first mass produced alternating current (AC) radio the following year, followed by the first push button tuning in 1927.

(The company’s brand name of Zenith was created by a contraction of Mathews and Hassel’s amateur radio callsign, 9ZN, that dropped the prefix number 9 and added the letters “ith” to the end of the stylized, and now household, name.)

The Great Depression prompted changes in industries across the globe. The company shifted its focus from high end Zenith radios to more affordable models. In imitation of its competitors, in 1931 Zenith released its own “cathedral radio,” the Zenette Model L, featuring a stylish Art Deco design.

The company also began producing table and chairside models, which were produced with a handle on top to increase their portability. One of these Zenith radios, the model 500H, is considered one of the highest quality portable transistor radios ever produced.

Zenith radios gained a well-earned reputation for excellence and innovation. What began as a small, kitchen-based company became a corporate titan that, in 1962, employed 12,000 people. 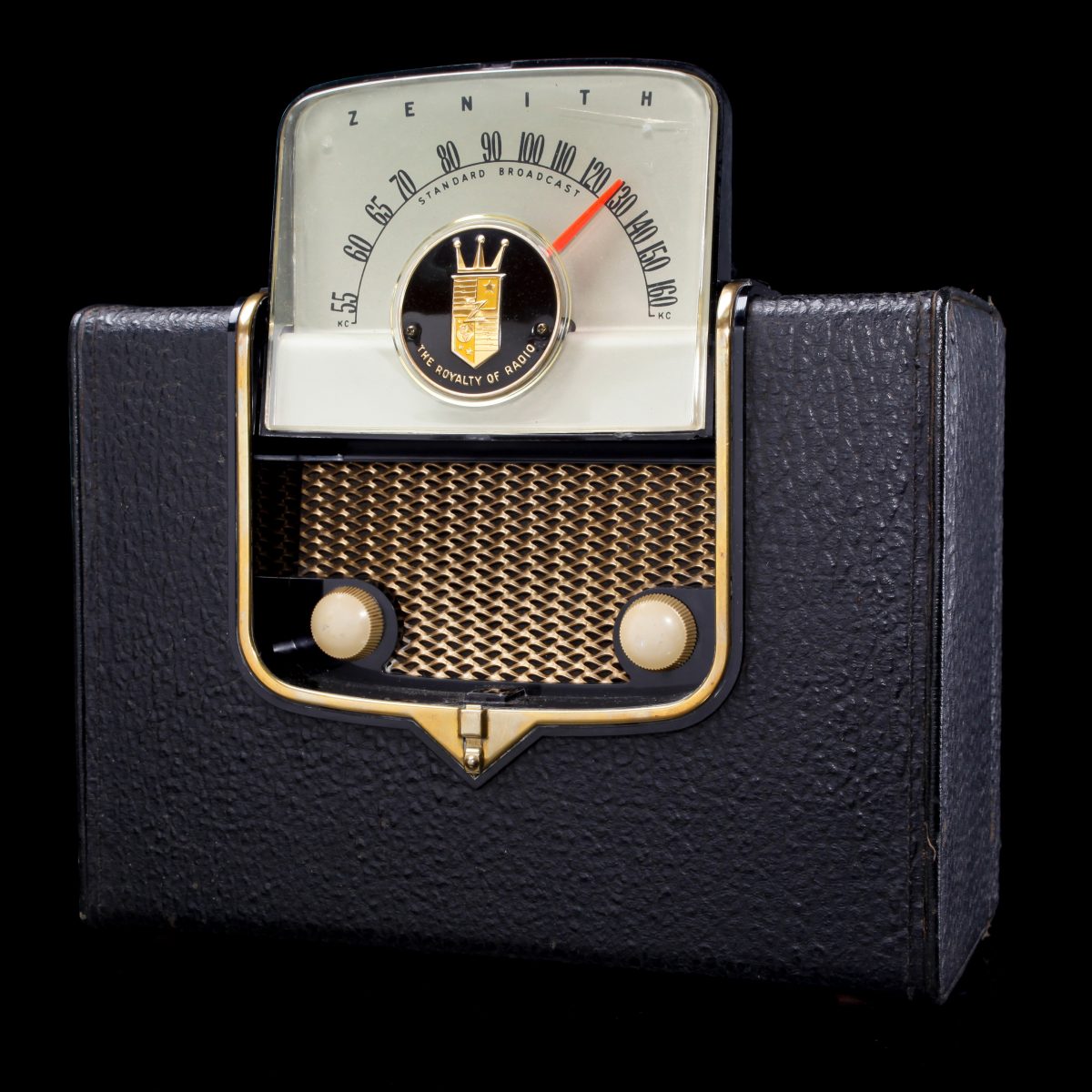 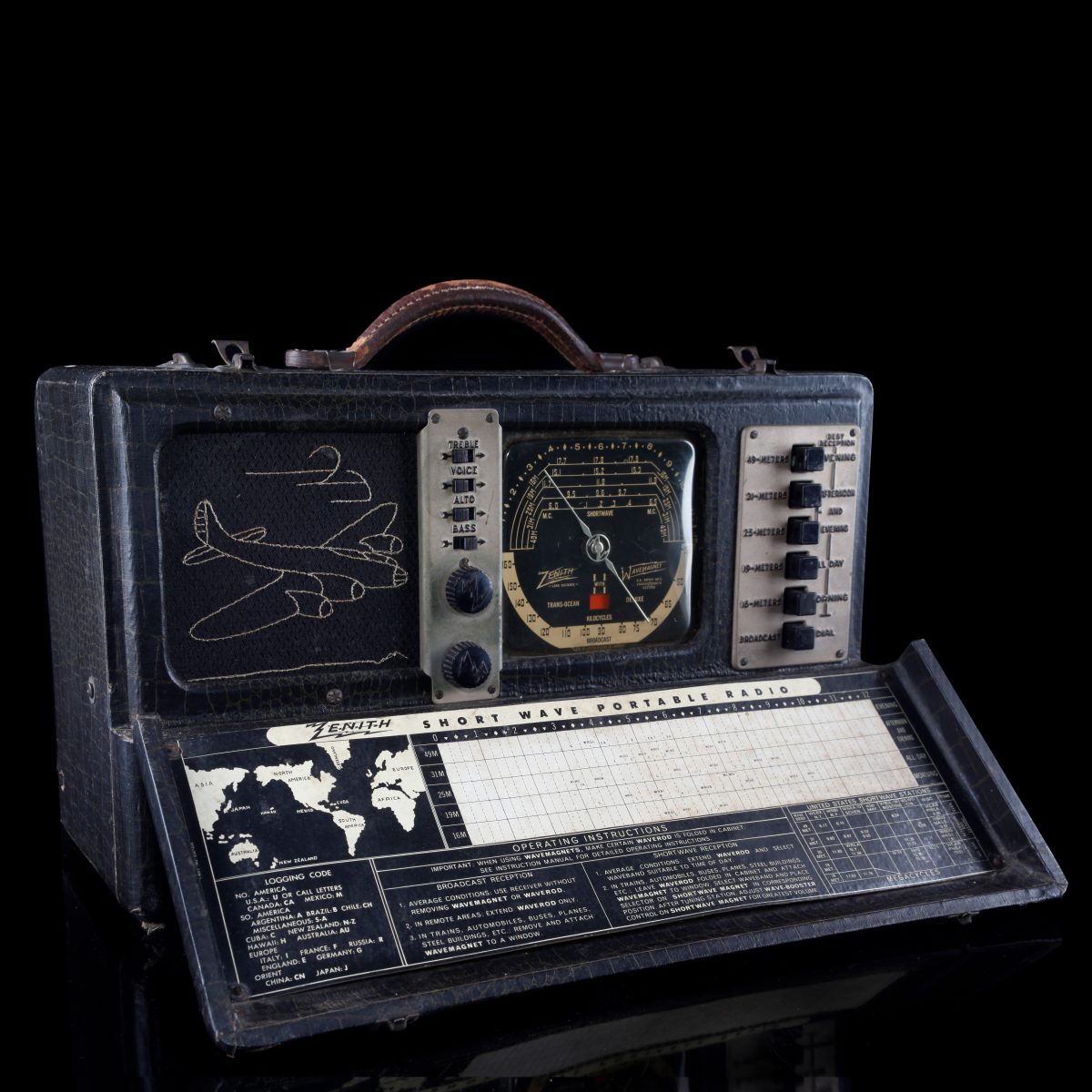 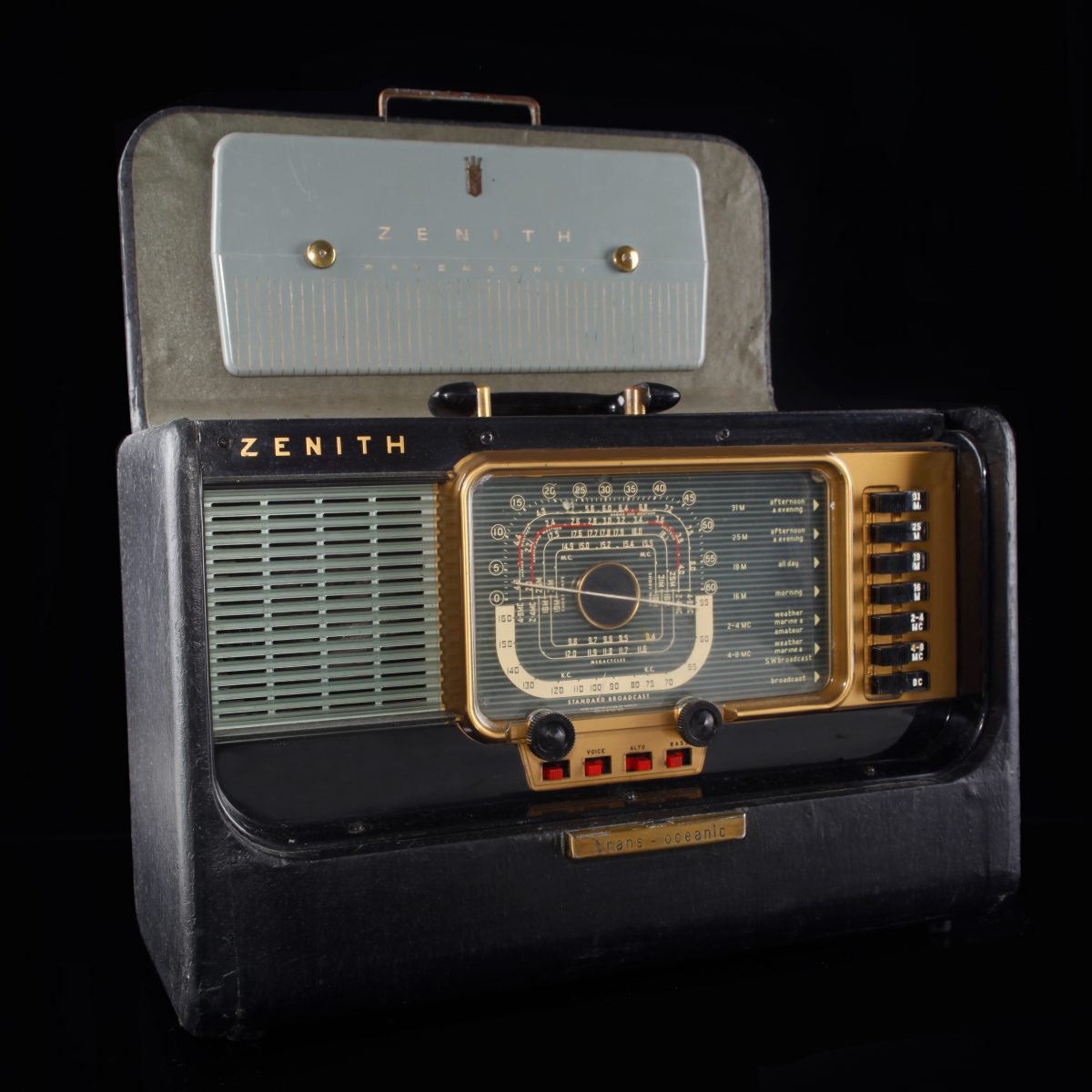 Zenith was famous for providing superior products to discriminating customers. Its motto for years was “The Quality Goes In Before The Name Goes On,” reflecting the company’s commitment to excellence and its decades’ long reputation for producing it.

The growth experienced by Zenith in turn helped shape modern America: Zenith co-invented FM stereo broadcasting and in 1940, it launched the first FM radio station in the American Midwest. 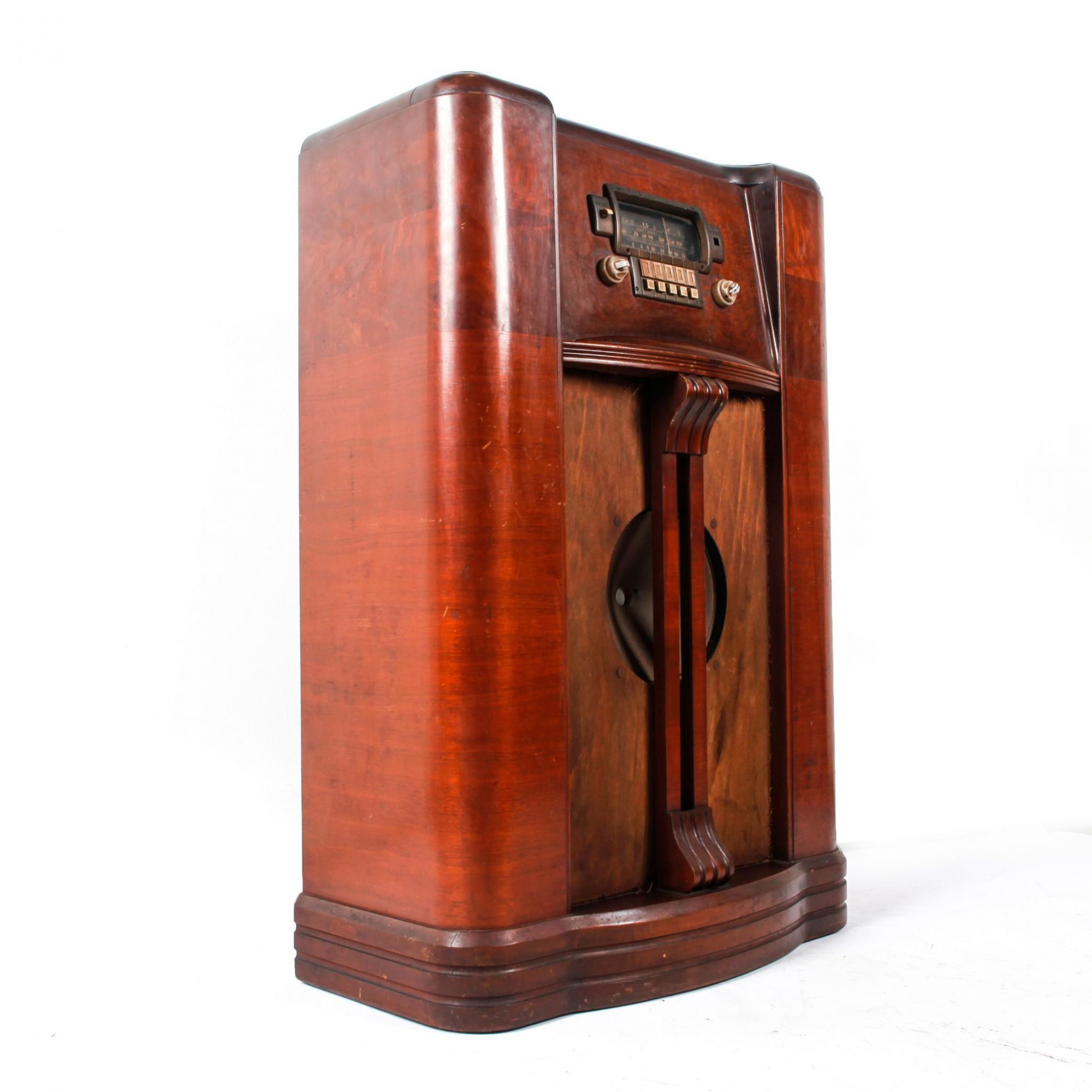 The addition of several new components and features provided the new brand with much higher selectivity, sensitivity and quality than found in previous models. The cabinet design was well suited to the radio’s various functions; it set the standard and style for tube-type Trans-Oceanics through the 1960s. 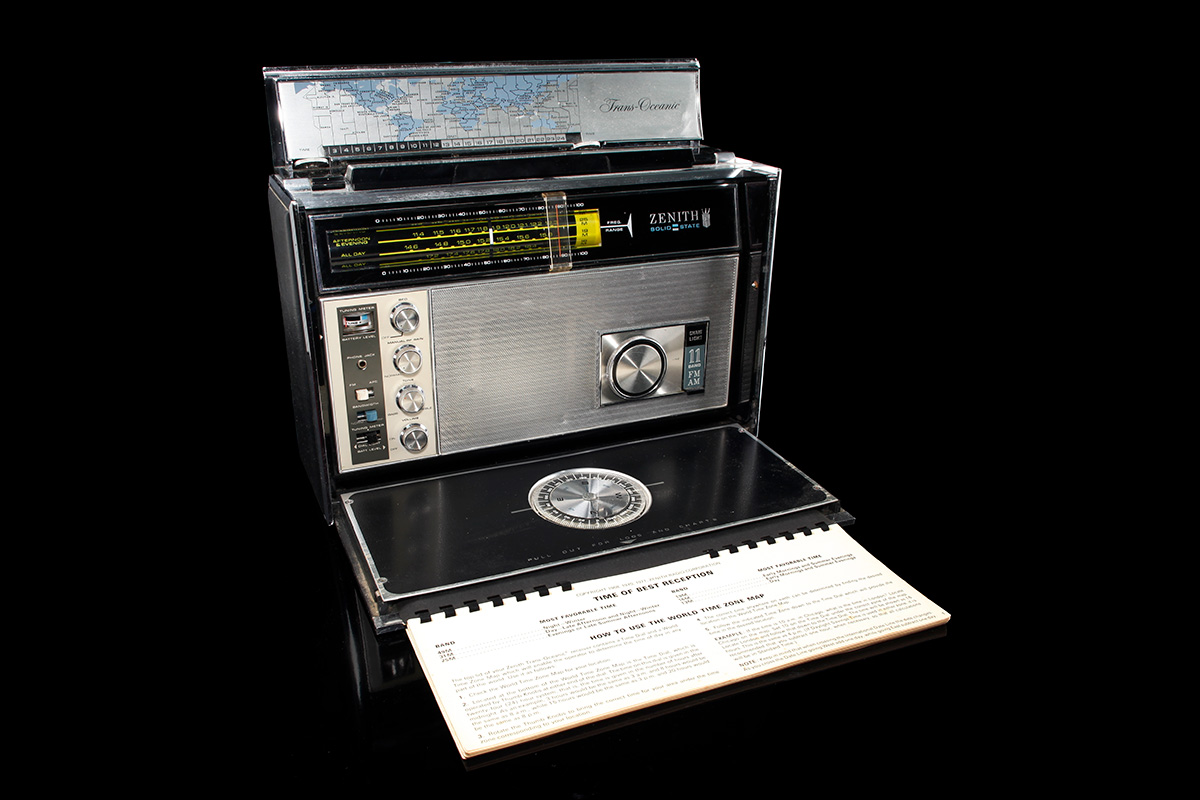 The Trans-Oceanic series Zenith radios were highly regarded for their durability, the quality of their construction, and their performance as shortwave receivers. They accompanied soldiers to war and scientific explorers on expeditions around the world.

The Golden Age of Radio ended in the 1950s, when television gradually became the preferred medium for scripted entertainment, variety and dramatic programming.

The Golden Age Zenith radios are artifacts of American history that continue to produce beautiful music, with all the resonance, signal sensitivity and tuning precision they ever possessed when they were handmade by Hassel, Mathews and their small group of engineers.

Whitley’s Auctioneers is proud and honored to offer vintage Zenith radios to collectors who will treasure the legacy of these relics of a bygone age, when music and sound were the lodestones of our lives. Our knowledge has grown over the past couple of years as we have now had the pleasure of working with multiple collectors of vintage Zenith radios.

Interested in parting ways with your collection?
Lion and Unicorn can help.